Our first plaque is a bronze pavement plaque which was unveiled on 23 February 2005 to commemorate the first branch of Waitrose then known as Messrs Waite, Rose and Taylor, which opened over 100 years ago in 1904 at 263 High Street Acton W3 and is now occupied by the Acton Bella Italia Pizza restaurant. This plaque was jointly sponsored by Ealing Civic Society with the Acton History Group and Waitrose Ltd. Our second plaque is a green wall plaque which was unveiled on 23 March 2006 to commemorate William Willett who was the inventor of Daylight Saving Time, which is known as British Summer Time in this country. It was erected at his former home at 16 Avenue Crescent Acton W3 and it was jointly sponsored by Ealing Civic Society with the Mill Hill Park Residents’ Association and Hamptons International who occupy William Willett’s former estate offices in Chelsea.

Our fourth plaque, unveiled on 16 June 2011, remembers Fred Perry, the last British Wimbledon tennis champion, at the Brentham Club in Meadvale Road, W5 1NP, where he trained and played table tennis (and became a national champion) and then lawn tennis. See also under English Heritage Blue Plaques. Other famous sportsmen who were members of the Club are Mike Brearley, the former English Cricket Team Captain, and Peter Crouch, the international footballer.

This plaque commemorates the world famous teddy bear Winnie-the-Pooh. It was unveiled on 14 March 2012 on the Victorian east wing of The Elms, within the grounds of the Twyford C of E High School, Twyford Crescent, W3 9PP. This was the site of the Alpha Works of J.K. Farnell & Co Ltd, a soft toy factory. Farnell Bears were first manufactured here in 1908. Daphne Milne, wife of the author A.A.Milne, bought one of Farnell’s ‘Alpha’ teddy bears from Harrods’ toy department in August 1921 for the first birthday of her son Christopher Robin Milne.

In May 2013 we unveiled a plaque which commemorates John Compton (1876-1957) the builder of cinema, cathedral and church organs. He originally set up business in Nottingham, but moved to Turnham Green Terrace in Chiswick in 1919. In 1930 the John Compton Organ Factory moved to Chase Road, Park Royal, North Acton. Compton worked mainly on electric action pipe organs and electronic organs. The plaque is installed at 37 Audley Road Ealing W5 3ES where he lived for 27 years. The nearby Church of the Ascension still has its original Compton Electrone organ (1947). Click here for more information. Two plaques were unveiled in May 2015. The first is for James Hadley Chase at 4 Woodfield Avenue W5 1PA, which is part of the Brentham Estate. He was born on Christmas Eve 1906 and was given the names Rene Lodge Peck Brabazon Raymond. His family moved away from Ealing before the 1911 census. He later changed his name and became the author of over 90 books, including several which were made into films. His most famous book was probably No Orchids for Miss Blandish, published in 1939. He died in Switzerland in 1985. Dr Edith Whetnall was an ENT surgeon, a pioneer and world authority in paediatric audiology and co-wrote The Deaf Child, (1964). She established an experimental hostel for deaf children at 8 Castlebar Hill, W5 1TD which was opened in 1953 by Ian Macleod, the Minister of Health. The hostel was in operation until 1993. In 1963 the Nuffield Hearing and Speech Centre opened next door at 6 Castlebar Hill and Dr Whetnall was its first director. It closed in 2006. By the time of her early death in 1965, Dr Whetnall’s clinics were used as a model throughout the country and abroad. Eric Ravilious (1903-1942), the painter, designer, book illustrator and wood engraver, was born at 96 Churchfield Road, W3 6DH. His family moved a few years later to Eastbourne where his father, a shopkeeper, set up his business following earlier bankruptcy. Eric went on to become a renowned artist, designer & illustrator who tragically died in 1942 as an official war artist whilst flying on active service over Iceland. The plaque was installed jointly with Acton History Group on 5 October 2016. Ralph Downes (1904-1993) an organist, organ designer and music teacher. He was born in Derby, and designed the organ for the Royal Festival Hall.
He lived at 9 Elm Crescent W5 3JW for much of his life. Charles Jones (1830–1913) Ealing’s architect and Borough engineer, responsible for the Town Hall and many other buildings in Ealing, over his 50 years’ service. This plaque was unveiled at the ECS AGM on 10 April 2018 and has now been installed at 5 Windsor Road, W5 3UL. 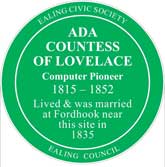 Ada Lovelace (1815-1852) mathematician, writer, sometimes regarded as the first computer programmer. She lived in Fordhook near Ealing Common as a young woman. The plaque was unveiled at Ealing Town Hall by the Earl of Lytton, a direct descendant of Ada Lovelace, on 9 May 2019. It has now been installed on the building occupied and owned by Grimshaw & Co Estate Agents at the junction of Fordhook Avenue and the Uxbridge Road W5 3LD. 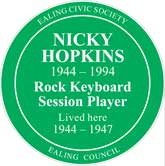 Nicky Hopkins (1944-1994) born in Perivale, he was a pianist and organist who recorded and performed on many pop and rock music releases from the 1960s to the 1990s including songs by the Rolling Stones, Beatles, Kinks and The Who. This plaque was unveiled on 19 October 2019 at 38 Jordan Road Perivale UB6 7BX. 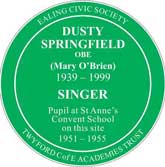 Dusty Springfield (1939-1999), a successful soul and rock singer and record producer, she lived in Kent Gardens in the 1950s and was educated at St Anne’s Convent School, Northfields. The plaque was unveiled on 13 October 2020 at the entrance to Ealing Fields High School (which has replaced Dusty’s school), Little Ealing Lane, W5 4EJ. Our plaque features in this video about the school with music from Dusty. 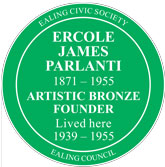 Ercole James Parlanti  (1871 – 1955) who lived at 2 Fielding Road W4 1HL and was an artistic bronze maker.  His foundry produced the Peter Pan statue in Kensington Gardens and the RAF memorial on the Embankment. 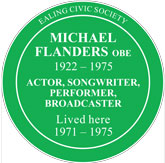 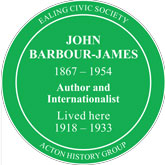 John Barbour-James (1867-1954) author and promoter of African Caribbean achievements born in British Guiana. He lived at 84 Goldsmith Avenue W3 6HW between 1918 and 1933. There is more detail about Barbour-James’ interesting life in this article from Acton Historian which is reproduced by kind permission of the author Dr Jonathan Oates and the publisher, Acton History Group.

Our plaques are supplied by Wards of Bristol.

ECS plaques currently under consideration are for:

Madeline Green (1884-1947) a figurative artist who exhibited widely in the UK and abroad. She was born in Ealing and lived at 40 The Mall W5 for much of her life.

Kirsty MacColl (1959-2000) singer songwriter who lived at 48 Mount Park Road, W5 from 1985 until her death. The house has a recording studio and she recorded her last album there.

Sir Hugh Wontner (1908-1992) hotelier who became managing director of the Savoy and Lord Mayor of London. He lived at various addresses in the Borough.