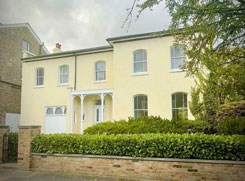 A house close to the original centre of Ealing around St Mary’s Church has been acquired by a developer and is threatened with demolition, to be replaced by a four storey block containing 8 flats. 6 Marlborough Road W5, originally called Clive Lodge, was the first house built on the street and is one of the earliest houses erected in Ealing, dating from the mid-19th Century. Since 2014 it has been locally listed on the Council’s heritage asset register.  The society is supporting many local residents appalled at this proposal to demolish a unique building of local heritage importance, that could be sensitively updated as a family home or even converted to a small number of distinctive flats. Apart from the loss of the heritage asset, the proposed new building is not environmentally sustainable, includes a proposed basement in an area of known problems with underground water sources and would appear over dominant within its plot. The design, which includes overlarge front and side gables, is also not sympathetic to the location.

If you agree that Ealing should respect and preserve its architectural heritage, do consider lodging an objection to this proposal. The application, reference 225185FUL, can be accessed here.