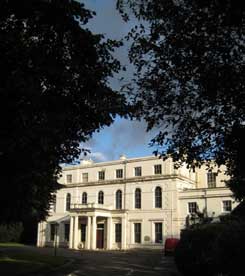 James Wisdom, Chairman of the Friends of Gunnersbury Park and Museum, entertained us on Tuesday night when he delivered the Annual John Delafons lecture at our favourite venue, Open Ealing in Dickens Yard. He updated us on the redevelopment of Gunnersbury Park and its many historic buildings. The Park was purchased from the Rothschilds and opened to the public in 1926. Although the Park and museum are actually in the London Borough of Hounslow they are on the border of Ealing, are well used by Ealing residents and upkeep has been shared between the 2 boroughs. Over the years the Park and its many listed buildings declined until Heritage Lottery Funding was first awarded in 2014. James talked about the many achievements since then including the restoration of the large mansion and orangery, the construction of the sports hub, car park improvements, the new cafe (sadly destroyed by an arson attack but being rebuilt) and the restoration of the round pond and the horseshoe lake. The small mansion is being repaired to make it safe and watertight thanks to funding from Historic England and Highways England. Finally there are the tremendous improvements in the parkland over the last few years: the lovely flower borders, the wildflower meadow, the vegetable garden, the new orchard, the basket beds and the many cherry trees (funded by the Japanese Sakura Foundation), all thanks to the wonderful gardening team led by Chris Ellis who has now sadly left for Marble Hill. But there is so much more to be done and changes are being made to the governance of Gunnersbury to improve the ability to raise much needed funds to improve and maintain the Park. Uses must be found for the small mansion and stables, further improvements made to the orangery, decisions made about the old farm buildings in the centre of the park, the south west entrance point, the fencing, and vehicle access for events to name a few current issues. Meanwhile usage continues to increase. It was estimated that there were 1.2 million visitors in 2020, and there are plans for the construction of several more large residential blocks at the south end whose residents will doubtless want to make use of the Park.