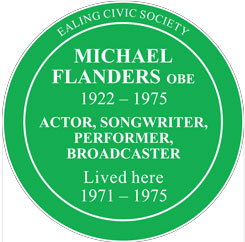 The latest Ealing Civic Society plaque was unveiled on 14 September at 63 Esmond Road, W4, Michael Flanders’ last home in Bedford Park where he lived from 1971-5. The unveiling was carried out by his daughters, Stephanie and Laura, before a small group of family members and friends. Later in the evening that day a talk was given by Graham McCann on the life of Michael Flanders, as part of the Chiswick Book Festival. Michael Flanders was a writer and performer of comic songs, as well as actor, broadcaster and disability campaigner. He is also commemorated by an English Heritage blue plaque at 1 Scarsdale Villas in Kensington, together with his friend and collaborator Donald Swann.