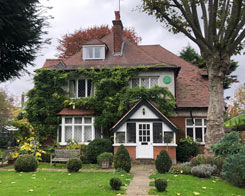 One of our green Society plaques has just been erected in memory of Michael Flanders who lived in Bedford Park between 1971 and 1975. It is on his former home, 63 Esmond Road, but has yet to be formally unveiled. Michael Flanders (1922-1975) was an actor, broadcaster, writer and performer. He was a wheelchair user as a result of contracting polio whilst serving in the Navy during the Second World War, and was one of the very few disabled people on stage during his lifetime. He was multi talented but was particularly known for writing and performing comic revue songs with an old school friend Donald Swann. You will find a picture of this and all the Society’s plaques on our plaques page.