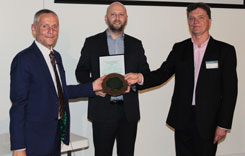 The wonderfully restored Hanwell Station has won our annual award this year. The plaque and certificate were presented at a ceremony on 26 October at the Open Ealing Arts Centre in Dickens Yard. The station is a Grade II listed building dating from the 1870s, which has now been carefully refurbished, giving step free access, a new waiting room and general improvements to the area. Even the paints were matched to the old GWR colours. As a result the station has now been removed from Historic England’s Heritage at Risk Register. Crossrail, Network Rail and TfL have worked together to create a station for the new Elizabeth Line trains which (it is hoped) will stop here from May 2022. The architects were Fereday Pollard. The picture shows our guest speaker Chris Griffin, CEO of the Museum of Brands, presenting the certificate and plaque to Peter Herridge, TfL Stations Enhancement Manager, and Edmund Bird, TfL Heritage Manager.  Our judges were also impressed by Ealing Fields High School which has seen the careful refurbishment of another Grade II listed building. In addition, architects Bowmer + Kirkland have created new buildings with excellent modern facilities which are full of light and interesting detail. The school was given a commendation.

We are grateful to our judges: Harbinder Birdi, Anthony Ferguson and Gavin Leonard who visited our shortlist of 5 projects. Harbinder discussed each one in turn in his thoughtful presentation at the beginning of the evening. Following the award presentation, Chris Griffin introduced us to the Museum of Brands. It all began with a man called Robert Opie deciding to save his chocolate wrapper. Before long he had created a collection of packaging which has expanded into a museum in Notting Hill, which Tripadvisor now ranks as the 23rd most popular out of 243 museums in London. It is an ” Aladdin’s cave of retro design and memories – the only museum of its kind in the whole world”. Chris’s talk provoked a large number of questions, after which we were able to celebrate the Award and the return of in person events with a glass of wine.

We are extremely grateful to Open Ealing, our lovely new venue.