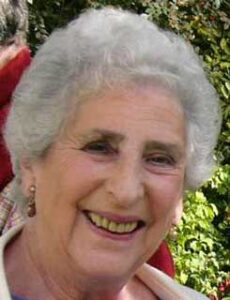 There were 30 participants at our Zoom event on 10 June entitled “Commemorating Corinne Templer”. Corinne, our former Vice President, died in December aged 91. Her son Mark, who was one of many who spoke at the event said she would have been “embarrassed but very proud”. The event started with a short clip of a 1977 Open University video “Who Plans Ealing?”, starring a lecturer sporting a large medallion over his wooly jumper. The video documented a case study of the Council’s attempts to build a large shopping centre in central Ealing and a 6 lane highway in place of Mattock Lane, removing a chunk of Corinne’s front garden. Corinne and her indomitable fellow campaigners, Sybil McRobie and Joy Anthony, are featured in the film talking about the stupidity of the plans and the lack of community involvement. They won the battle and Corinne continued her campaigning work including with Save Ealing’s Centre and Ealing Civic Society, right up until her death. There were many recorded and in person tributes by friends and fellow campaigners including Gillian Berry and Simon Anthony (sister and son of Joy Anthony), Sir Sherard Cowper-Coles (the Society’s president), Tony Palmer, Peter Mynors, and Will French of Save Ealing’s Centre. These tributes were followed by informal and spontaneous contributions from many friends who had known and worked with Corinne. We would like to thank all who spoke and attended the event.