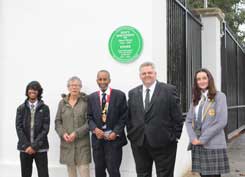 Our latest plaque is for Dusty Springfield (1939-1999) who had a long career as a soul and rock singer in the 1960s through to the 1990s. Dusty was born Mary O’Brien and moved to Ealing where she went to school in St Anne’s Convent School, Northfields between 1951 and 1955. She was one of the best selling UK singers of the 1960s and had a large number of hit singles including I Only Want to Be with You, Son of a Preacher Man and I Just Don’t Know What to Do with Myself. Dusty’s old school has recently been transformed into Ealing Fields High School which was officially opened on 13 October when the new plaque was unveiled by Ann Chapman (Acting Chair of the Society) and Keith McGinness (Senior Project Manager at Bowmer + Kirkland ,the firm which has rebuilt the school and sponsored the plaque). The picture shows the new plaque at the entrance to the school on Little Ealing Lane, with the Mayor of Ealing, Dr Abdullah Gulaid, flanked by Ann Chapman, Keith McGinness and the Head Boy and Head Girl. This is the Society’s 14th plaque. See our plaques page for pictures of all our plaques.