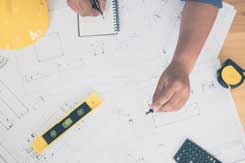 Every month our Environment Committee goes through the major planning applications submitted to Ealing Council. We send in an objection if we consider a proposed development to be unsuitable in view of its scale, density, aesthetic qualities or impact on the local environment. Here is a selection of our recent responses to the Council:

Firstly, we supported this application which includes the installation of an ECS plaque celebrating Dusty Springfield at the site of her old school.

“Ealing Civic Society proposed the mounting of a plaque on this site to commemorate Dusty Springfield so we are in support of this application.  However, for both aesthetics and for security, we consider that the plaque should be mounted higher up the wall than is indicated in the application documentation so that its centre is aligned with the centre of the proposed school logo.  In addition, as a matter of record, Council officers have previously advised the Society that Listed Building Consent is not required in order to mount a plaque on a Listed Building.”

We would not normally respond to minor amendment applications, which are intended to be just that, minor and in line with the granted permission.  However, we have recently seen these being submitted more often for amendments which we consider should be the subject of full applications as they are more than minor.  In this case, the addition of just one unit in a multi-block development may seem insignificant, but we had concerns about the approach being used and the impact on the amenity of the development if granted, so submitted an objection.

Minor Material Amendment (S.73) to vary condition no.2 (Approved Plans) for one additional residential unit, the total increase from 364 to 365, amendments to elevation of Block E, in relation to planning permission ref.178944FUL amended by 185890VAR dated 28.03.2019 for ‘Redevelopment of the site to provide a mixed use residential-led development comprising of 333 residential units (use class C3), 2,086sqm retail foodstore (use class A1), 67sqm of flexible space (use class A1/A3/D1), energy centre and sub-station, with building heights between 3 and 16 storeys; with associated car and cycle parking; hard and soft landscaping; private and communal amenity spaces. Variation seeks an increase in the number of residential units (from 333 to 364), an increase in height comprising three additional storeys to the tallest building (an increase from 16 to 19 storeys), two additional storeys to one of the buildings facing onto Western Avenue and an additional storey to one building in the south east corner of the Site with associated changes to elevational treatment, play space, cycle parking and layout’

“Ealing Civic Society objects to this application which is the latest of a number of incremental increases to the volume of the development.  This application should be viewed cumulatively with the previous S73.a permission 185890VAR dated 28.03.2019 as there has now been an increase of 32 housing units and up to 3 additional storeys from the originally consented position. These changes clearly constitute more than minor material amendments. – See Ealing Guidance on Minor Material Amendments:

In our view, the original and modified schemes already constituted overdevelopment with an overbearing building.  Although involving no further change to the consented massing, this proposed additional unit would contribute to the excessive density.  More significantly, the previously consented entrance and reception area would be spacious and provide a little compensation for the overdevelopment and overbearing nature of the development.  However, the proposed extra unit would remove these features and significantly reduce the circulation space available to future residents and diminish their experience as they enter the building.”

We objected to this example of over-development, extending an already excessive granted application to include unacceptable ‘garden grabbing’.

“Ealing Civic Society objects to this application.  We objected to the previous application (granted) for conversion of the existing building into 9 flats on the grounds of overdevelopment.  This application now proposes the provision of 10 rather than 9 flats within a similar building envelope and the addition of two single storey detached houses.  Overall, this would nearly triple the number of residents of the site and constitute massive overdevelopment.  The planned two single storey detached dwelling houses would be particularly cramped, serviced only by a very narrow road that would not provide access for emergency, particularly fire brigade, vehicles (even of smaller size than standard).  Their construction would result in insufficient remaining amenity space and unacceptable loss of mature trees.

Furthermore, we draw the Council’s attention to the front of the main building which faces the Montpelier Park Conservation Area.  We maintain that the proposals for this building would be out of keeping with the Conservation Area.  We reiterate our recommendations that we submitted in response to the previously consented application 194418FUL which we regret were not incorporated into conditions when the application was granted.   Our recommendations were as follows:

While acceptable in principle, this application for expansion of a school involves building on Metropolitan Open Land and is of disappointing design.  We did not feel that the justification for building on MOL had been made and expressed our disappointment with the design.

“Ealing Civic Society objects to this application.  We are disappointed that the proposals are significantly different from those of the 2016 application which had architectural merit, particularly in that they were in keeping with the original school buildings.  In 2016, the proposals envisaged enlarging the school using a modern rendering of the original school design.  In the current application it would appear that, for reasons of economy, a more simplified approach has been taken, resulting in additional buildings which would be out of keeping with the original building.  In addition, we note that this application does not guarantee the use of new facilities by local community organisations.  In order to ensure protection, any new facilities should be made available to the local community through Section 106 agreement rather by informal agreement.

Finally, while we note that the issue of building on Metropolitan Open Land was raised in 2005, the Council needs to be satisfied that the current application to build on MOL is both legal and appropriate in current circumstances.”

We objected to this application to replace architecturally uninteresting flats with new-build houses and flats on the grounds of over-development and incongruous design.

“Ealing Civic Society objects to this application.  We consider that the scheme would be overdevelopment and that a reduction in number by one of the end houses is required.  The separation between the rear of the buildings and existing properties, at 12-13 metres, is also insufficient.  In addition, we object to the glazed top sections with a terrace, which we consider to look incongruous in the street scene and therefore out of character with most other buildings in the immediate vicinity.”

We objected to this replacement of garages with a block of flats on several grounds including over-development and loss of mature trees.

“Ealing Civic Society objects to this application.  The principle of residential development on this brownfield garage site is acceptable; however, this should be of a scale and design that is suitable for the site.  This application meets neither requirement.  It is acknowledged by the applicant that the proposal is significantly over-dense for the suburban setting.  The proposed design is blocky and unprepossessing.  Although it is claimed that the homes are designed to lifetime homes standards, the proposal is for a three storey building with no lift.  Apart from the practical difficulties this would result in for such activities as moving in or out or bulky deliveries, it does not meet lifetime homes requirements.  The proposal would also require the loss of 5 mature trees which is unacceptable.

In summary, the proposal is not acceptable in its present form and should be refused.”

“Ealing Civic Society supports the principle of enabling development to provide funds for necessary works to the Grade II listed Brentham Club. However, the proposed development involves building on Metropolitan Open Land, which normally we would not support.  At present, from the evidence available to us, the case for such loss of MOL has not been sufficiently made, neither have details of the works to be done to the club and other supportive evidence that the development would provide the funding to facilitate that work been provided. We would support this application provided we can be satisfied that the construction of the dwelling house would be an enabling development. Before making its decision on this application, we urge the Council to insist upon the assurances it needs, as set out by Historic England, for the economic case for this development.  If the application is then granted, completion of the works to the club should be secured by condition.  In addition, we would encourage the Council to respond to any comments from the Brentham Garden Estate Conservation Area Panel about the design of the planned development, given its proximity to neighbouring heritage assets, in particular, the Grade II listed Brentham Club.”