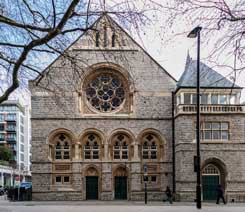 The Charity Commission has this week rejected Ealing Council’s application to take control of the assets of the charitable Trust that owns the Victoria Hall. This blocks the Council’s current proposals for selling the Hall, along with other Trust property and the rest of Ealing Town Hall so that the site can be turned into a boutique hotel. The Victoria Hall was built next to Ealing Town Hall with money raised through a Victorian crowdfunding campaign. It’s owned by a charitable Trust which was set up in 1893 to provide a venue for the community and “Meetings, Entertainments, Balls, Bazaars, and other Gatherings whether Social or Political.”  Following a public consultation which closed on 7 January 2020, the Charity Commission has now published its verdict. It means that the deal with Mastcraft cannot proceed unless the Council substantially revises its proposals. For more information see the Friends of Victoria Hall website.