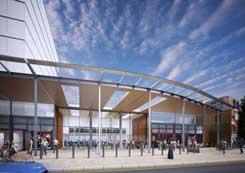 Crossrail advise that the station upgrade works are now progressing well. Installation of the steelwork for the new lifts started in November with brickwork following behind; the lifts are expected to come into operation later this year. The programme of work is being carried out in two phases. The first will deal with the south side of the station (right hand side facing the station). Most of the new ticket hall and the canopy in front will be built in this part. The work is expected to complete in late summer when most of the new street level ticket hall will open up. The second phase will deal with the north side of the station and include the completion of the ticket hall, the canopy in front of this part of the station and Villiers House (the office block above the station). Design work is also continuing on the platform canopies.

The design of the canopy outside the station has seemingly reverted back to the design originally given planning approval in 2017, which had earlier been deemed ‘unbuildable’ because of the weakness of the road bridge over the railway but further work has since indicated that it is apparently now possible. The TfL Rail service to Reading started before Christmas replacing the GWR services. Freedom Pass users may now travel as far as Reading free of charge using the TfL Rail services (which will eventually be branded Elizabeth Line). There is still no firm date for when the new trains will start running to Heathrow, but this spring has been suggested. The delay appears to have been caused by continuing compatibility problems between the new Crossrail trains and the existing signalling systems employed on this section of the line.

Following consultation on their proposals, and in the face of a large number of objections, Ealing Council are re-thinking the public realm works outside the station and are planning to hold a consultation meeting with stakeholders.