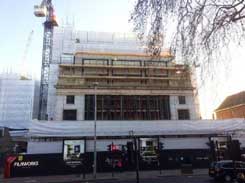 The Filmworks development continues to rise, with priority being given to the residential elements. Offering a reminder of what once was, the original cinema façade has recently been uncovered, presumably as its incorporation into the new build approaches.

You may recall from earlier reports that when ECS representatives met one of the directors of Picturehouse Cinemas and their architects just before Christmas, they indicated that Picturehouse would not gain possession of the shell of the building on Bond Street which would house the new cinema until the middle of 2020 and that fit-out was unlikely to be completed until the middle of 2021. So there is still some way to go.

We hope to arrange a follow-up meeting with the architects later this year to discuss possible design options to incorporate into the new development some salvaged artefacts from the old Empire cinema.