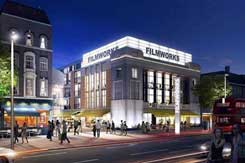 Earlier this month, Ealing Civic Society representatives met one of the directors of Picturehouse Cinemas and their architects for the Ealing Filmworks development to discuss possible incorporation into the new development of salvaged artefacts from the old Empire cinema which was demolished in 2008/9.  These include auditorium light fittings and some stained glass windows which were originally located in the landing areas.  Picturehouse were receptive to doing this and the architects said that they would come up with some design proposals in the New Year at a follow-up meeting.  As for progress on the new building next to Bond Street, which would house the new cinema, they indicated that Picturehouse would not gain possession of the shell of the building until the middle of 2020 and that fit out was unlikely to be completed until the middle of 2021.