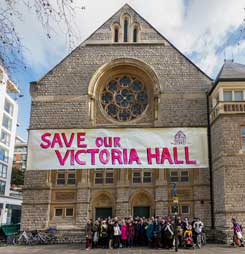 Campaigners are urging Ealing residents to reject a scheme proposed by the Charity Commission which would pave the way for the Council to lease Victoria Hall as part of its Town Hall deal with a hotel operator. The Victoria Hall was built next to Ealing Town Hall with money raised through a Victorian crowdfunding campaign. The Hall together with the Princes Hall is owned by a charitable trust set up in 1893 to run the hall for the benefit of local people. Over the years it has hosted thousands of meetings, entertainments and exhibitions. However, for nearly two years the Council has been seeking to persuade the Charity Commission to allow it to amend the Trust rules so that the Victoria Hall can be included in a £2.5M sell-off of the Town Hall site.

The Commission has now published the draft of a Scheme which would clear the way for this to happen, subject to the result of a public consultation. The consultation was due to end on 26 December but, following a request from the Friends of Victoria Hall (FoVH), a new group set up to safeguard the future of the Hall, the Charity Commission has agreed to extend the deadline to Monday 6 January 2020. A  FoVH team is currently studying the details of the draft Scheme and will be publishing detailed guidance on how and why Ealing residents should object to it.

A set of documents about the draft Scheme and the consultation can be downloaded by clicking here.

The Friends are likely to be launching an appeal to fund the objection process in the New Year and if you wish to support its work go to their website for more information and to sign up to their newsletter. There is also a petition available.  Click here for the petition. If you are interested in the history of the hall and the battle to save it, you might want to watch this 10 minute video.