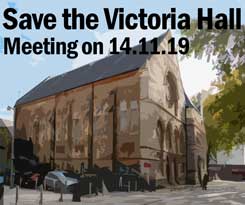 Victoria Hall is the large public building behind Ealing Town Hall. It was built in the 1880s with money raised by public subscription for use by local people, and it is owned by a charitable trust.  It is Ealing’s largest indoor public venue but is now in danger of being lost to the community after more than a century. Ealing Council wants a developer to absorb it into a new hotel. Community use would be guaranteed on a restricted basis for 10 years, but it would then inevitably become just part of a commercial operation. Seven community groups (including the Society) have formed the Friends of the Victoria Hall in order to save the building for the community as a performing arts, exhibition and meeting space. An inaugural public meeting of the Friends of Victoria Hall is scheduled for Thursday 14 November, 7:30 pm in The Forester Pub, 2 Leighton Road, West Ealing, W13 9EP.