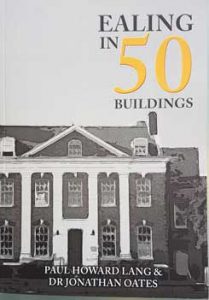 A new book on Ealing has just been published: Ealing in 50 Buildings, by Paul Howard Lang and Jonathan Oates. It is published by Amberley (£14.99) and available in local bookshops. The authors are both local and former librarians, and the book is dedicated to Paul Fitzmaurice, a member of Ealing Civic Society’s Executive Committee for many years and well known to members as a speaker on aspects of local history. The 50 buildings described cover all parts of the Borough from Greenford Rectory to Bedford Park and they are beautifully illustrated with a large number of photographs. There are, for example 5 recent colour photographs of the interior of Pitzhanger Manor, described as the jewel in Ealing’s crown and the only secular Grade 1 listed building in the whole Borough. Members will know that it recently won the Society’s 2019 Award. Other perhaps lesser known buildings and landmarks include The Plough (a Fourteenth Century pub in Norwood), The King’s Head (the oldest pub in Acton), Southall Water Tower and Hanwell Cemetery.