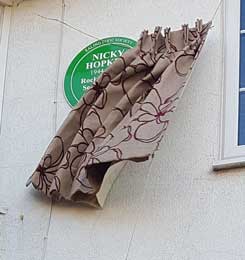 Nicky Hopkins is often called rock’s greatest session musician. He was born in Perivale in 1944 and spent part of his childhood at 38 Jordan Road. He died aged 50. On 19 October Nicky’s widow, Moira Hopkins, unveiled Ealing Civic Society’s latest green plaque at his former home to commemorate his life. Before the unveiling we heard from Perivale Councillor, Tariq Mahmood, who was delighted that Perivale Ward Forum has funded the plaque and the Society has coordinated the project. Hopkins enthusiast John Wood, a driving force behind the project played 6 minutes of Nicky Hopkins playing keyboards with the Stones, Kinks, the Beatles and many other well known musicians, to an appreciative crowd in the front garden. Finally the Mayor of Ealing, Dr Abdullah Gulaid, gave a short address. The Carroll family, who are musicians and Hopkins fans, were extremely generous in opening their home to fans and providing refreshments. The new plaque can be seen on our plaques page by clicking here.