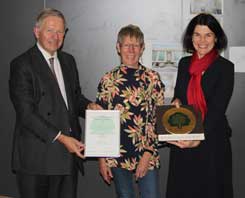 The Society’s 30th Award Ceremony took place on 23 October at the University of West London. It was tough on the 7 other shortlisted entries that they were up against the stunning Pitzhanger Manor restoration which has already been given a range of awards.  Ealing Civic Society Acting Chairman, Ann Chapman, explained that the aim of the award was to embrace all kinds of building and landscape design.  She was impressed by the quality of the entries and said: “We had a wide variety of entries, all to a very high standard – ranging from a number of interesting landscaping schemes through school, residential and church buildings to the full restoration of a historic central Ealing landmark building.” Harbinder Birdi, one of our 3 judges, discussed and showed photographs of the shortlisted entries before Ann Chapman announced the Award winner, the Pitzhanger Manor restoration. This is a major 4 year conservation project in the heart of Ealing, led by Ealing Council in collaboration with Pitzhanger Manor & Gallery Trust. It has peeled back layers of history, extensions and overpainting, returning Pitzhanger to John Soane’s original design, now visible for the first time in over 175 years. Important structural elements of Soane’s design were reinstated, such as the conservatory demolished in 1901 and the dramatic central roof light. The architects were Jestico + Whiles. Clare Gough (Director, Pitzhanger Manor and Gallery Trust) is pictured receiving the award from Sir Sherard Cowper-Coles (the Society’s President) and Ann Chapman (Acting Chairman,centre).

The International Presbyterian Church, Drayton Green, a redevelopment of an existing church site, was highly commended. It involved the demolition of the existing annex buildings and construction of a new meeting hall and linked ancillary buildings around the retained Grade II listed chapel. It is described as a civic building responding to the needs for flexibility and a growing community. The architects were Piercy and Co.  Two interesting projects for the Borough of Ealing were commended: a 2 part landscape scheme, Lammas Park Swale, a water management project and wildflower meadow, plus Ealing Orchards and Meadows project covering several green spaces; and Acton Skatepark a new skatepark for the Borough, funded by Ealing Council working in conjunction with Ealing Skatepark Association.  It was designed by Canvas.

The certificates were presented by Sir Sherard Cowper-Coles, the Society’s President.  We are very grateful to our 3 judges, all local architects: Harbinder Birdi, Anthony Ferguson and Ania Lill. See our Awards page for further details and pictures, and our Awards archive for previous winners.