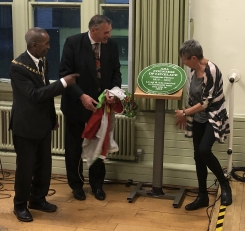 The Society’s annual John Delafons lecture was dedicated to the Victorian mathematician Ada Lovelace, daughter of Lord Byron and Anne Isabella Milbanke. As a girl she lived in Fordhook House, near the Common. Professor Ursula Martin, a scholar from Wadham College Oxford and expert on Ada Lovelace gave the audience of nearly 100, a fascinating and lively talk about her influences and achievements. She was interested in mathematics and calculation and developed a methodical way of working at an early age. She encountered Charles Babbage’s work on analytical engines and together they worked on patterns in networks, leading to the first concepts of computer science.

Following the talk a brief address was given by the new mayor, Abdullah Gulaid, his first public event. Lord Lytton, great great grandson of Ada Lovelace gave an amusing introduction to the unveiling of our latest plaque which is to be placed at 5 Station Parade, on the corner of Uxbridge Road. Shown left are the Mayor, the Earl of Lytton, and Ann Chapman, Acting Chair of the Society. Click here for a complete list of the Society’s plaques.