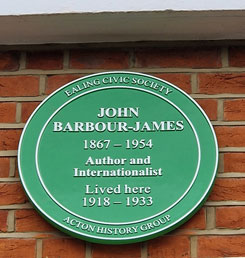 Two plaque stories in 2 weeks is a record for us. We are delighted that there is finally a plaque for John Barbour-James at 84 Goldsmith Avenue Acton. Barbour-James (1867-1954) was born in British Guiana (now Guyana). He worked for the colonial civil service, became a postmaster and transferred to the Gold Coast (now Ghana). His family moved to Acton in the early 1900s, and in 1917 Barbour-James retired on the grounds of ill health. They moved to 84 Goldsmith Avenue in 1918 and he spent much of the rest of his life working to promote British understanding of black achievements and capacities. He became very well known for his lectures, his vast array of contacts and his work in various organisations such as the African Progress Union, the League of Coloured Peoples, the African Patriotic Intelligence Bureau (which he founded) and the Association of Coloured People (of which he was president).  He returned to the West Indies in 1938 and died in Guyana in 1954. Sadly there appear to be no descendants from his family of 8 children. His daughter Amy Barbour-James (1906-1988) was also a civil rights activist. There is more detail about Barbour-James’ interesting life in this article from Acton Historian which is reproduced by kind permission of the author Dr Jonathan Oates and the publisher, Acton History Group.

We are very grateful for the help and advice we have received from Acton History Group, Jeffrey Green, the Black Cultural Archives, Dr Jonathan Oates and the house owner at 84 Goldsmith Avenue. Details and pictures of all our plaques and other plaques in the Borough are available here.