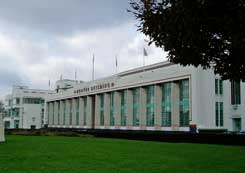 Ealing Planning Committee have voted decisively (9-2 with 2 abstentions) against the proposed Wiltern development behind the Hoover Building in Perivale on the grounds of the visual impact of the development on the Grade II* listed building, the paucity of affordable housing and the overwhelming scale of local opposition. The local community was particularly concerned about the density of the proposed development and the congestion it would cause in what is effectively an extremely busy cul-de-sac – the enclosed rear of a Tesco car park. We are delighted that the importance of the listed Hoover building has been recognised and proper weight given to the many concerns raised by heritage bodies and local campaigners against this inappropriate development.

The Society commented several times on the planning application, including this last minute note to the Planning Committee: Ealing Civic Society notes that Historic England have expressed considerable reservations about the proposed development which in their view would harm the views of the Grade II* listed building from various viewpoints despite a slight reduction in the height of the tower in the latest version of the proposals. They also note that the proposal is not consistent with Ealing’s own Local Plan in relation to the siting of tall blocks in the Perivale area. Also, there is no evidence that a proper study has been undertaken of the alleged economic benefits of the scheme which are said to outweigh the damage to the heritage asset caused by the redevelopment. We do not consider that the Council has sufficient expertise to undertake such a judgement exercise since it made redundant its own conservation officer last year who could have undertaken a considered assessment.